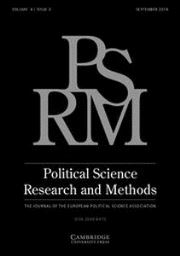 The economic voting literature has been dominated by the incumbency-oriented hypothesis, in which voters reward or punish governments at the ballot box according to the nation’s economic performance. The alternative (policy-oriented) hypothesis, in which voters favor parties that are closest to their issue position(s), has been neglected in this literature. This article explores policy voting with respect to an archetypal economic policy issue—unemployment. Voters who favor lower unemployment should tend to vote for left parties, since they “own” the issue. Examining a large time-series cross-sectional pool of Western European nations, this study finds some evidence for economic policy voting. However, it is conditioned by incumbency. According to varied tests, left incumbents experience a net electoral cost if the unemployment rate climbs. Incumbency, then, serves to break any natural economic policy advantage that might accrue to the left due to the issue of unemployment.